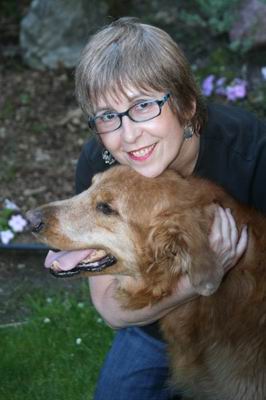 OK, I can hear it now – what the heck can be "good" about surgically removing your dog's leg? Initially, it seemed like an unthinkable thing to do. I approached the whole process (of treatment of osteosarcoma in my dog, Cody) with much trepedation and anxiety. My initial reaction was (although have seen many "tri-pod" dogs lead happy, full lives) "I am NOT removing a 10 year old dog's leg!". Our journey began at that point.

Those of you who are familiar with our Wall of Fame know some of Cody's story, since he was my poster boy this year. For the rest of you, I will begin at the beginning.

My husband & I returned from a wonderful vacation in late September. When we picked up Cody & Bailey at the dogsitter's, she mentioned that Cody was limping on his left rear leg. I had not seen this previously & we made an appointment with our veterinarian as soon as possible. I was hoping for something relatively easy like a torn ligament or sprain. However, being in rescue makes me very aware of just how many Golden Retrievers get cancer, so I was hoping for the best, but prepared for the worst. The first X-ray showed nothing & we were given pain meds and told to return in 3 weeks, since bone cancer does not always show up on films right away.

Three weeks later we returned for a second X-ray and all of my worst fears were confirmed. Although the Dr. cannot officially diagnose osteosarcoma without a biopsy, all of Cody's clinical signs, plus the X-ray, were pointing in that direction (plus, he is a 10 year old Golden Retriever, which automatically puts him in a high risk category for cancer).

At that point, my life went into a complete tailspin. Decisions regarding Cody's treatment plan had to be made, and made quickly. Osteosarcoma is a very aggressive form of cancer and it warrants quick action.

There are a number of differing treatment plans for canine osteosarcoma. I will be sharing our experience with just one. I am not recommending our choice to anyone. I am simply sharing the experience, and how it has worked out so far. If your dog is ever diagnosed with bone cancer, you owe it to him/her to explore all available options, and then choose which one works best for your pet & your family.

Following Cody's diagnosis, I spent about a week and a half considering his potential treatment. My veterinarian initially said he could do the amputation, but would not do chemotherapy. His previous experiences with certain chemo drugs had not been positive. At that point, I sought opinions from two other veterinarians who would do chemotherapy. (And for my "second opinions", I have to thank my good friends in LIGRR for arranging appointments with their own veterinarians.)

The first part of the typical course of treatment for osteosarcoma is amputation of the affected limb. Cody is 10 years old! I had seen "tri-pods", but they were young dogs. However, all three of the doctors I spoke with felt that his hips were good and arthritis mild, so he would be a good candidate for surgery. I decided that if this was the first step in buying my dog good quality time (and if we get very lucky, saving his life) it would be worth doing. Happily for us, while I was doing my research/crash course in canine bone cancer, my veterinarian was doing some research of his own. He discovered that there was a type of chemotherapy that would not give Cody terrible side effects, and that he was comfortable administering in his office (thus alleviating considerable travel & expense on our part). I have a lot of confidence in my veterinarian and decided that this was the way to go. 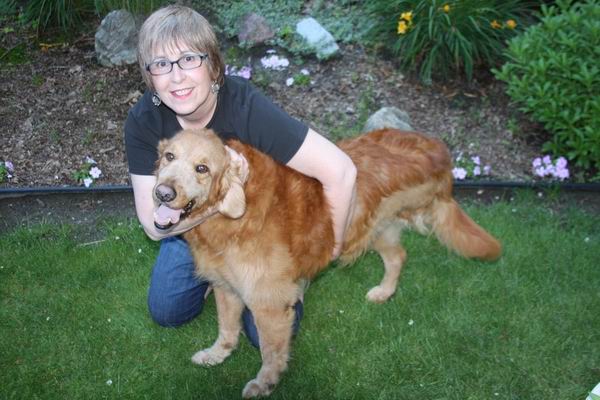 Cody's left rear leg was amputated in mid-October. The surgery went smoothly and my husband & I picked him up the next morning. I didn't know what my reaction was going to be to my new amputee. Luckily for me, Cody came flying out of the office, tail wagging a mile a minute, ready to go home. If I focused on his face & hugged him, I did not have to look too hard at the amputation site. (There was no bandage – just a clean shaven area with stitches and considerable bruising.) However, I was given instructions on soaking and medicating the area, so my limited veterinary nursing skills were boosted at least 100%.

Cody's first couple of days, post-surgery, were difficult. He was on limited pain medication. (In retrospect, I have learned from this. If I ever have to deal with a similar situation, more pain meds will be given.) Cody also had to adjust to walking on one slightly arthritic rear leg (with a minimally dysplastic hip). He was a miserable soul until we upped the pain meds and added Rimadyl. Once the pain was controlled, his life was indeed worth living.

Amazingly, my old dog has adapted beautifully to walking on three legs. We did have a few rough moments during the snow and ice storms. When your dog only has three legs, the possibility of falling and breaking another one can be literally life threatening. The first time I saw Cody go down in the snow, I panicked until I realized that he was just doing that Golden thing ... "I think I'll just throw myself down in the snow because it feels so good!" Every time I saw him enjoying himself, I knew I had done the right thing.

I am not saying that Cody's life has been all fun & games since October. The second part of Cody's treatment was five sessions of chemotherapy. Four out of five sessions were tolerated fairly well. Following the fourth session, he was sick for a full week, threw up & ate very little. My veterinarian made a couple of changes in session five and Cody did very well afterward.

One of the side effects of chemotherapy is that it lowers the white blood cell count & leaves the dog prone to infection. Cody did develop one horrendous infection initially. We were fortunately able to treat it successfully & he was given a preventative dose of antibiotics for the remainder of the chemo sessions.

As I write this, it has been 9 months since Cody's initial cancer diagnosis. His last chest X-ray (7 months after surgery) was clear, i.e. no visible signs of metastatic cancer. So far, we have no sign that the cancer has spread and I am hoping that it stays that way. According to statistics I have read, 50% of dogs who have had similar treatment to Cody are still alive one year after the initial diagnosis. 25% may get two years. I am hoping that my boy is in that 25% or even better.

The hardest time for me during this whole process was the decision making. You want the best for your dog; you don't want him to suffer. There seem to be so many variables that it is difficult to know what is right. Now that Cody is DONE with treatment, I am very comfortable with the choices I made on his behalf. Truthfully, for us the amputation was the easiest part. Cody runs. He jumps off the deck. He climbs on the couch. The best part is that he is the same happy dog we have always had & we still have him. Without the amputation and chemotherapy, he would no longer be with us. But each day is a gift when your dog has cancer, so we cherish every moment & know we did the right thing for Cody & the rest of our "pack". Because I do Golden Retriever Rescue, I believe in Happy Endings and, just for today, this is ours!

If you would like to learn more about this subject, I recommend "No Regrets" by Susan Neal. It's an easy read, but very informative. It also covers some of the alternative treatments for canine osteosarcoma.

Cody went to the Rainbow Bridge Nov. 19, 2009. He died of a facial cancer which was unrelated to his original Osteosarcoma diagnosis.