With your help, we can help bring in even more dogs from China…

CAUTION: The information below will be disturbing.

You may be under the misconception that there are dog farms in China, similar to our cattle ranches: dogs are bred, born, raised then taken off to the slaughterhouse for a humane demise. You couldn't be further from the truth. Many of the dogs rescued from the dog meat trade are stolen pets! Due to the lack of awareness dog ownership responsibilities and of the risk, many people in China do not keep their dogs on leashes. Dog meat trade vans will cruise the streets of Beijing and surrounding towns looking for dogs. Here is a possible scenario: someone is walking his/her dog down the street (off leash), a van pulls up, a guy jumps out and snatches the dog before the owner can react. Most of the time, in cases like this, the owner will never see that dog again! Millions of pet dogs are stolen every year and sent to slaughterhouses. Strictly speaking, the selling and eating of dog meat is against the law in China. This is not because of any animal rights laws, because there are zero animal rights laws, but because dogs are not only nabbed off the street. The slaughtering of dogs is extremely unpleasant. The "custom" of consuming dog meat requires that the dogs be slaughtered in a certain way in order to make the meat more succulent.

The stopping of trucks and confiscating dogs on their way to a slaughter house is dangerous work that requires a large group of dedicated volunteers whose sole purpose is to save dogs from the horror in which they've been living and a very painful death.

Once there are enough volunteers at the scene, the dogs are confiscated and off-loaded. Some dogs have already perished and must be taken away. The remaining dogs go through a triage and sorted into groups according to their levels of health.

Even if golden retriever rescues were to bring 100% of the dog meat golden survivors over to the U.S., it would not end China's dog meat trade. What will end it is pressure placed on China's government by its own citizens and large animal rights groups, such as Humane Society International. 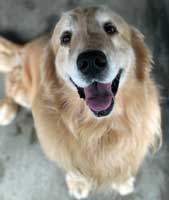 However, bringing the dogs over to the U.S. will support China's internal anti-dog-meat trade movement and alleviate the pressure in the various shelters, and most importantly, we will have given so many goldens a second chance to live.

Alone, we cannot stop this travesty, but we can help save Goldens, one dog at a time.

Recently we have taken two dogs - Winston and Piper. With you continued support, we can take more.